This post is completely out-of-date and inaccurate, but I don’t plan on editing or deleting it. Instead, please see my fully updated AOL layoffs chart for 1996-2010.

I have to hand it to Owen Thomas of Valleywag for pure, unbridled ambition: who else would attempt a chart of all the layoffs at AOL from Day One until another 2,000 people were laid off this October?

How about me? I think I’ve gotten closer to a full account of the carnage at AOL than Owen did. Give him credit, though; he was only off by 3,945 people and left out only a few years worth of layoffs. How much does Valleywag pay, anyway – not that I’m interested?

I’ve been wanting to redo Owen’s chart for three weeks but as a few of you know I wasn’t quite up to it. So with apologies for my belatedness, here’s the most complete chart of AOL layoffs I think anyone has come up with. 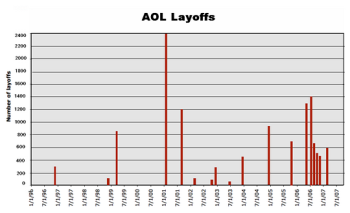 For more about the October 2007 layoffs, check my AOL Layoffs section.