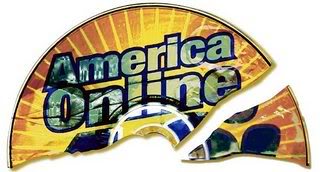 I’ve had it with AOL’s software. Before anyone at AOL gets too warm and fuzzy that I noted recent improvements to how the software uninstalls, keep in mind I only download and install AOL to test it for people who want to get rid of it. That’s a lot of people: my most enduring tutorial for removing AOL has seen roughly 10,000 unique visits. For comparison, the site’s had over 100,000 (should’ve checked my stats first!) 136,000 uniques, but at least 60,000 of those were from Digg, so you can do the math yourself and see one sixth of regular (non-Digg) visits are to a page on how to uninstall AOL.

As an unacknowledged, unappreciated, unofficial beta tester for AOL who’s willing to tell it like it is, I can honestly and objectively state when the software is screwed up. Internet connectivity is the biggest screw up of all for AOL 9.0 VR and AOL 9.1 Beta. Every time I sign onto AOL with either version, my connection to the Internet is lost.

My first step is to use Network Connections “Repair Connection” to re-enable connectivity, but it can’t. It gets as far as flushing the DNS cache, then gives me the message: “Windows could not finish….renewing your IP address.” AOL’s software does not seem to be blocking renewal of it, since I get that message even when my connection is working.

For some reason, if I disable AOL from running at startup, then reboot, that fixes the problem, but the next time I sign off of AOL, my computer is booted offline again. I’ve gone through this five times this week. I went through it many times last month with the AOL 9.0 VR software as well.

Not only that, but if I try to surf, it says “a connection cannot be established”, then a tiny light blue pop up appears telling me AOL is looking for connectivity through TCP/IP. Then it tells me I need to create an account (I created an account when I installed the software), and gives me a box to fill in my screen name and password.Then it looks for a connection, but it fails to find one, so I stay offline, and lose my broadband connection to the Internet as well.

If this isn’t the most nightmarish software I’ve ever seen then I can’t name one. Bad enough older versions of AOL are so bloated and resource-hogging they slow a PC down to a crawl between the main app and the McAfee products autorunning along with them…now the new clients make me lose my connection to the Internet, and the Beta will not even let me use AOL. What the hell?

If the current beta testers were contributing anything of value with their reports, the 9.1 Beta wouldn’t have the same problems 9.0 VR does, so here’s my report. Do what you want with it, AOL.

Update: In a comment I’m asked by “Tom” if the problem may be “on my end”. My end has no connectivity problems if AOL isn’t installed; my end uses Win XP, but it’s the Vista users who complain in droves about AOL’s software. My end uses broadband, but Tom hasn’t responded yet to clarify what his connection and OS is. It would be more likely for me to have trouble running AOL in Vista, but I’m losing my broadband connection running it in XP, all the same.